For navigational purposes, stars have two naming conventions: proper names such as Canopus and a Greek letter designation called the Bayer system such as Alpha Carinae, meaning the alpha star of the constellation Carina. The alpha star means most dominate, or if all are about the same brightness, the first one in a logical sequence of numbering, as in the Big Dipper, which goes alphabetically from Alpha Ursa Majoris (Dubhe) at tip of the cup to Eta Ursa Majoris (Alkaid) at the end of the handle. Officially the constellation name in this system is in the Latin genitive form (belonging to), but Alpha Ursa Major would be adequate for record keeping and communications.

Science fiction readers will likely know of Alpha Centauri, which navigators call by its proper name Rigil Kentaurus, because this is the nearest star to our solar system and perhaps an early one to visit or receive visitors from. 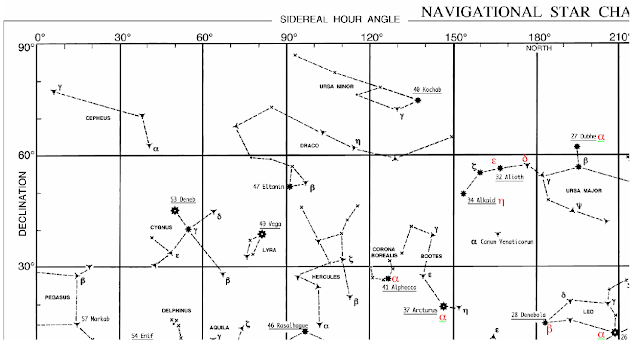 Figure 1. Sample of star names. The red labels have been added. Selected stars called navigational stars are assigned  unique numbers in the Almanac.

The USNO star chart above (from the support page of our cel nav text) shows how these names are used in the Almanac, sometimes using one name form and sometimes another. We see this also in the star charts from the Almanac, a sample of which is below. 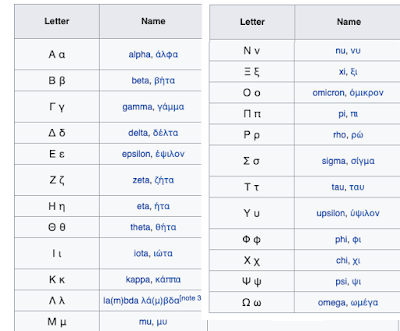 Comparing the alphabet with Figure 1, see the points mentioned above. In Bootes, there is one dominant star and it is alpha, and the other letters are more or less random.  In the Big Dipper the stars are similar in prominence, so they are labeled sequentially along the figure. In Leo, the brighter Regulus  (magnitude 1.4) is alpha and Denebola (magnitude 2.1) is beta. The brightness of stars is specified in terms of magnitude (see Brightness of Stars and Planets.)  All magnitude-1 stars  and most magnitude-2 stars have proper names. Less bright stars typically do not. 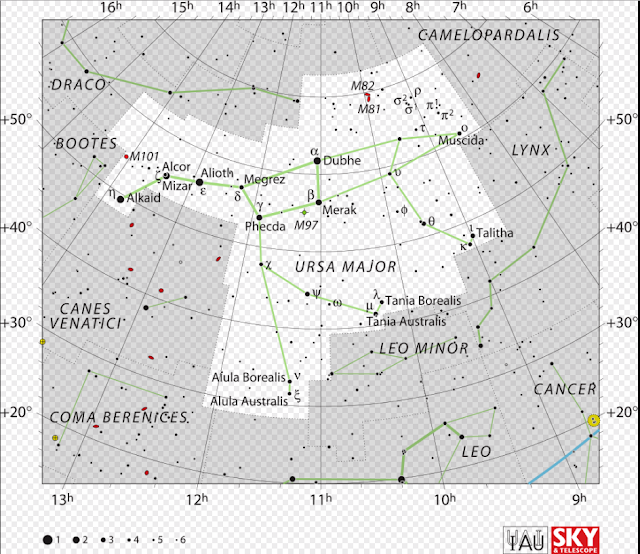 Figure 3a. Outline of the constellation Ursa Major (white area).  See these for any constellation
in the wikipedia.

Navigational Stars
There is yet another classification of stars that is crucial to navigators. The 57 stars listed on the daily pages are called navigational stars. They are also on the Index to Selected Stars in the back of the Almanac (p. xxxiii). These are bright stars, magnitude 1 or 2, but they are not chosen by brightness alone, but rather selected uniformly around the sky so that several of them will be in view at all times from any location. Polaris is notably not on that list, though it is used routinely for navigation and certainly qualifies as a "navigational star." 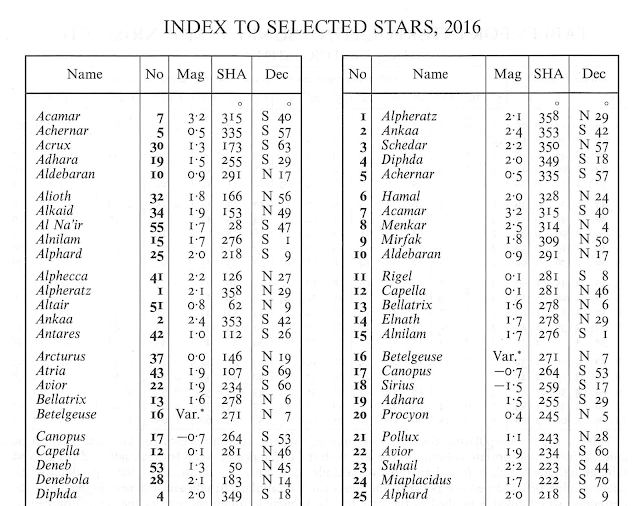 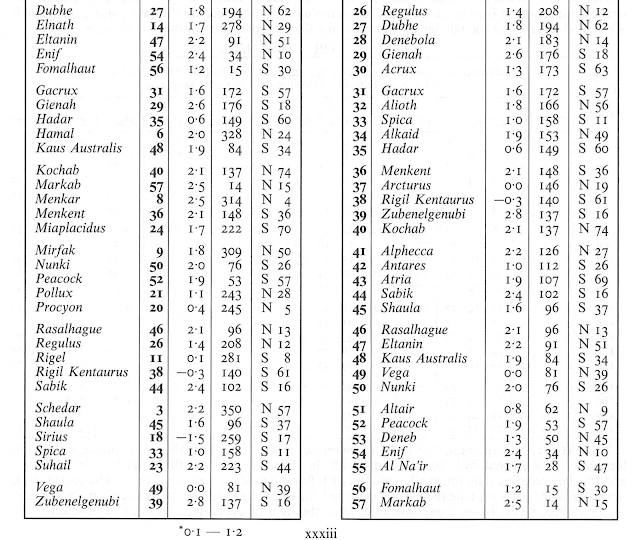 This list has been on page xxxiii  of the Almanac for many years, which is easy to remember, and it is also printed on the yellow cardstock bookmark that comes with the Almanac.  Listing the stars by number and alphabetically is a handy feature of this list.  Cel nav apps, including our own StarPilot, often use these star numbers for a quick way to select a star.

There are another 116 stars listed in the back of the Almanac that do not show up on the daily pages. That full list (174 stars) includes the navigational stars, and is presented in a unique manner, illustrated in Figure 4. The first half of the year (January to June) lists the stars by their Bayer designation ("Greek-letter name"), whereas from July to December they are listed by their proper names. This can be an important nuance to know when it comes to some star ID questions. All navigational stars have a proper name. 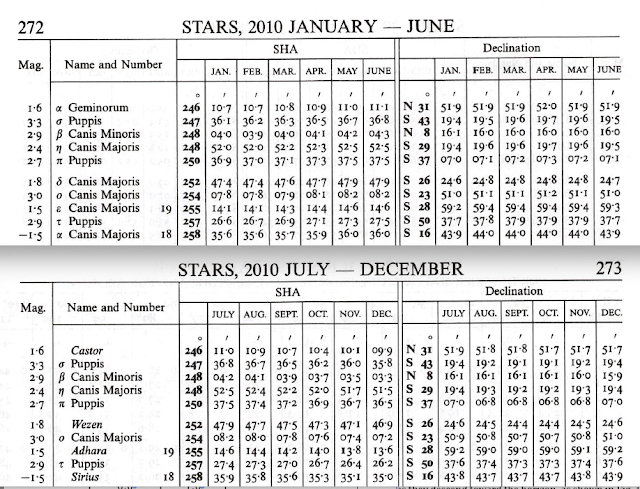 Figure 5. Sections of two facing pages of the star list at the back of the Almanac.

Here we learn, for example, that the brightest star in the sky, Sirius, is also known as Alpha Canis Majoris, the alpha dog in the Dog constellation. It has still another name—you guessed it: the Dog Star.

Stars in this list are sorted according to increasing SHA. If you know the star but not its SHA, check the star maps in the Almanac or the USNO version linked above, which plots star locations on a Declination-SHA grid.

This list provides more stars for navigation but it is very rare that we need one from this list. The navigational stars usually carry us across the ocean. Indeed, any ocean can typically be crossed using the same few stars with the aid of a planet or two.  See a real example in Hawaii by Sextant.


How to Pronounce a Star's Name
My answer would be, just about however you want to.  These are often complex names; many evolved from the Arabic, although Arabic speaking persons might not recognize the present form of the word. Alnilam, Alioth, Altair, are examples, as is, by the way, Alcohol. In fact, many of the prominent stars have many names, or many spellings for the same name, although there is now an official list of names and spellings as of June, 2018.  You will see that most of these were only formalized in 2016 or 2017.

The wiki has good presentations of stars organized by constellations, which include detailed maps of the constellation. Standard pronunciation guides are complex, so here is a starting point for the navigation stars, plus a few others we use in the course.  There are more alternatives than I have listed here.

My suggestion is choose a way to say it and then whenever you do say it, say it bold and clear. Anyone hearing who might have thought it was done another way would then pause, and likely take your word for it. It would be difficult in many cases to argue what is right.

For more, the definitive study of star names is the classic Victorian text  Star Names Their Lore and Meaning by Richard Hinckley Allen, which is online, being a remarkable work of Bill Thayer, formerly of University of Chicago.  There are also tons of used print copies online for a dollar or two, being the Dover edition from the early 60s. We have a copy of that one which we scanned, OCRed, and cleaned up to make an ebook long before Bill Thayer's work and also long before Google got into the practice of scanning all books.

The best stargazing program for Mac or PC is the amazing free one called Stellarium. Has a short learning curve, but is a remarkable and beautiful tool.  You can read digital values of height and bearing for cel nav studies as well.