The value of mean high water (MWH) at a specific location on a chart can be a crucial number in marine navigation. We need it to figure how far we can see a light at night, and we need it to figure what a bridge clearance will be. It is also needed to know whether certain rocks will be visible or not at various stages of the tide. These are all basic safety considerations we face in routine navigation.

MHW plays these roles because MHW is the height datum used on US nautical charts, which is the zero point for light heights and bridge clearances. This is not the same as the elevation datum used for elevation contours and spot elevations shown on charts. The elevation datum is mean sea level (MSL), which for most  practical purposes can be considered equal to the mean tide level, halfway between MLW and MHW.

Strangely enough, the important values of MHW were not listed in the standard NOAA Tide Tables (which ceased publication in 2021), but they are listed on every printed nautical chart and their RNC counterparts. The data appear in a table called Tidal Information. There are generally several values listed for points across the chart.

As we transition into ENC, however, we notice the MHW data are not so readily apparent. In fact, we get MHW from an ENC in a rather subtle manner. Namely the green foreshore shown on a chart is a specified depth area (DEPARE) object whose two bounding contours are the sounding datum (tide = 0) on the water side, and the height datum (tide = MHW) on the land side. The latter is effectively the drying height of the land at tide = 0, thus it is presented as a negative contour height equal to MHW.  See Introduction to Electronic Chart Navigation, for details of this process. 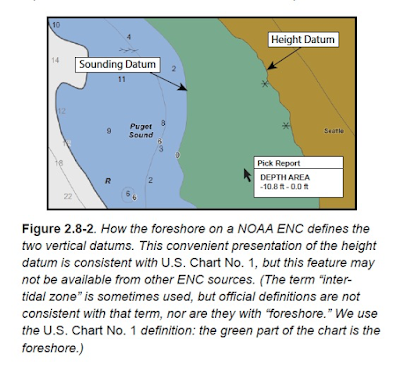 That is the way it works, and it is certainly no harder, if not easier, to learn MHW from an ENC than it is from an RNC.

The nuance to this process comes about because the ENC uses only one value of height datum (MHW) for the full range of the chart. This is not an issue for larger scale charts covering smaller regions as then the MHW does not vary much, but on small scale charts, even just at 1:80,000 we can have MWH from one part to another vary by as much as 3 feet. When this occurs, NOAA chooses just one value to represent all values on the chart, and that one value is chosen with safety in mind, which I emphasize as that is the topic at hand.
_________

Here is an example from the same region referred to in the Tidal Information table above that was captured from an RNC near Port Townsend, WA. First we look at two ENC chart scales, then the MHW on each. 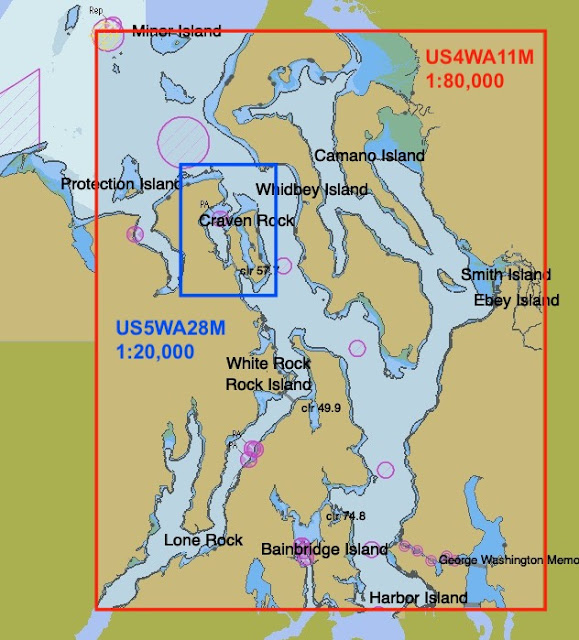 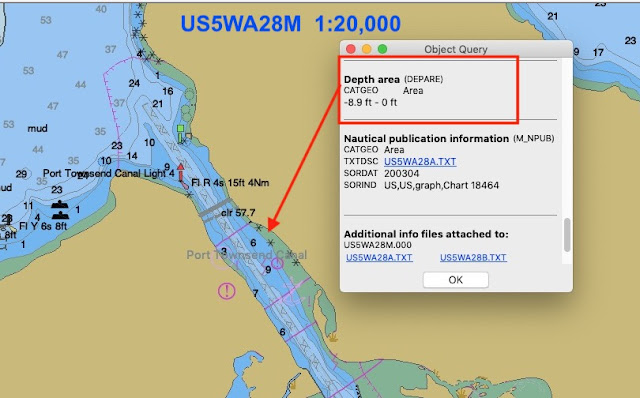 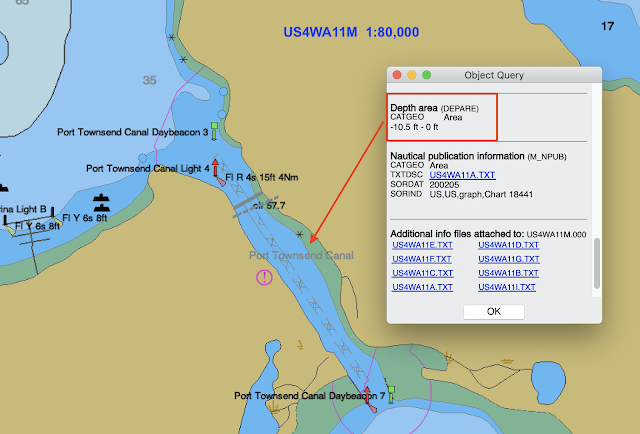 When we look at this same area on a much smaller chart scale, we now see that the ENC has chosen to use 10.5 ft to represent MHW on all areas on this chart, which does indeed span a much wider range of MHW values.

Bridge Clearance.
Bridge clearance is maybe the most direct example. As I approach a bridge to pass under and my mast is right near the max that might get through, I know that I count on favorable tide to help me, so I have to reckon the clearance I have.  The charted bridge clearance is 58 ft, which means that when the tide height equals MHW then the distance from water to bridge is 58 ft. When the tide is lower than MHW I have more clearance.

If this computation is to be wrong because the MHW value is wrong, most would agree you would want the clearance to err in the direction of predicting too little clearance, not too much clearance. If it erred being too big, I might try to go though and not make it. If the err makes it too low, I would not try…..or at least I would sneak up on it dead slow, hoping the tide itself was wrong and might sneak under. So with regard to bridge clearances, if my MHW is to be wrong, it is safest to have it be too small, meaning if we have a range of them over a specific ENC, but we can only choose one to use, the safest would be to use the smallest for all parts of the chart.

Geographic range of lights.
In clear weather, the visible range of a light is the smaller of the charted nominal range of the light and its geographic range in nmi, which is 1.17 x SQRT (Height of the Light in feet) plus a fixed term based on your height of eye.  The Height of the Light is given on the chart or in the Light List. These tabulated heights are all relative to MHW, which is the height datum of the charts. Thus a light with tabulated height of 20 ft would be that high above the water when the tide equals MHW. If the tide is less than MHW then the light is higher above the same water we are floating in, so we can see it from farther away.

Similar to the bridge clearance, actual Light height above the water = Tabulated height + (MHW - Tide). So then what is "safest" or most conservative if the MHW is to be off a bit? Do we want it too big, which would make the light higher than correct and thus visible from slightly farther than the truth, or do we want the visible range slightly under estimated with a low end MHW?  In other words, if the actual visible range to a light is 8 nmi, am I safer thinking it is 7 nmi or 9 nmi if it has to be one or the other.

My thought would be that it is safer to have the smaller range when planning an approach at night, and then when I see it earlier I know what to do, whereas if I think I should see it 9 nmi and do not, then I am not sure what is wrong with my navigation. So again in this case, the "safer" way to error on MHW is to take the lower limit.

Visibility of rocks.
On paper charts we have 3 kinds of rock symbols: a "plus-sign rock," which is a rock that is underwater for all tide heights greater than 0; an "asterisk rock,"  which is one that covers and uncovers when the tide is in the range of 0 to MHW (the height datum); and a "plus sign with 4 dots rock" that is awash when the tide is exactly or very near 0.

ENC has one rock object called UWTROC (Underwater/awash rock), which has an attribute WATLEV (Water level effect), which in turn can have values:

2. always dry: not covered at high water under average meteorological conditions. [ This is an islet, not a rock. ]

3. always under water/submerged: remains covered by water at all times under average meteorological conditions. [ This is analogous to plus-sign rock. ]

4. covers and uncovers: expression intended to indicate an area of a reef or other projection from the bottom of a body of water which periodically extends above and is submerged below the surface. Also referred to as dries or uncovers. (IHO Dictionary, S-32, 5th Edition, 1111). [ This is analogous to the asterisk rock. ]

5. awash: flush with, or washed by the waves at low water under average meteorological conditions. (adapted from IHO Dictionary, S-32, 5th Edition, 308) [ This is the plus-sign with 4 dots rock. ]

7. floating: Resting or moving on the surface of a liquid without sinking (Concise oxford Dictionary)

Here we confront several distinctions between RNC rocks and ENC rocks. First a simple terminology distinction. Paper charts refer to rocks awash as those that cover and uncover as the tide changes from the sounding datum (0 tide) to the height datum (MHW). We can confirm that in the IHO document S-4, where this K11 rock is listed as B-421.2.  This rock has a symbol of a simple asterisk on both RNC and ENC. On ENC it has a WATLEV = 4.

Here is the Bowditch definition, which is consistent with IHO S-4:

rock awash. A rock that becomes exposed, or nearly so, between chart sounding datum and mean high water.

In contrast, S-57 defines "rock awash" as one that is awash at or near the sounding datum, tide height = 0.  The ENC uses an asterisk for this rock as well, but assigns a WATLEV = 4.  Note that we must know the ENC definition of "awash" when reading this cursor pick.

The other distinction, which has effect on the present discussion, is the S-57 ENC definition of WATLEV 4, which is covers and uncovers—without any reference at all to the height datum, MHW. The quick conclusion from that is, the ENC choice of MHW therefore cannot have any influence on rock navigation, safe or unsafe, be it too high or too low. We could end it there, but for at least four more years we will navigate with both ENC and RNC, so we should still have a look at the consequences of an ENC error in MHW.

Right now if we have a rock that dries at 6 ft, with an actual MHW of 6 ft in that area, then this rock would be awash at tide = 6 ft, and for any tide height lower than this we would expect to see that rock.  If  the ENC reported MHW were 4 ft, then we would expect this asterisk symbol rock to be underwater or just at the surface at tide = 4 ft, but in fact when we got there it would be 2 ft above the surface. On the other hand, if the ENC reported the MHW at 8 ft, then we would expect to see this rock for any tide height less than 8 ft, but if we got there at tide 7 ft we would not see the rock.

In summary, if the above arguments are correct, then it seems that given a range of MHW values from which just one must be selected to encode into an ENC, then the "safest" value would be to choose the lowest one on the chart.

It seems to me that in at least some ENC this is not the guideline being used; it seems the higher end of the range is chosen.  After some effort, i am not able to learn the motivation of the policy in use, so we will stand by on this one.  In the end is will be a moot point, because all ENC are being reschemed and this will lead to charts over smaller areas where this is not a factor.
Note too that with the discontinuation of the Tide and Current Tables we now rely on direct access to NOAA data online and each of the stations includes a link to datums that have the MHW for that location, so we end up with as good or better data than we had.  In fact, it is actually better data, because the values listed on the paper charts and RNC are not being updated, anticipating replacement with the ENC, whereas the NOAA data online are up to date.
___________

In passing, if you might be working with an old set of NOAA Tide Tables, which  do not include MHW, there are two other parameters given for each station from which you can compute MHW.