Where Have All the Towers Gone? — Getting Into ENC Terminology

As you may know, NOAA is well into the process of sunsetting all paper charts, which is their way of saying they are replacing them with electronic navigational charts (ENC) and the new NOAA Custom Charts (NCC), a user designed and printed hybrid of the new and the old. This process will be complete (meaning no traditional paper charts left at all) by the end of 2024.

The ENC are indeed better than the traditional charts we are used to, but they are now all electronic products—even the new ones (NCC) that we print ourselves are based on the digital ENC. As such, they are effectively databases of charted objects, along with multiple attributes for each object. Both objects and attributes have 6-letter abbreviations.

One type of object, for example, would be a Lateral buoy (BOYLAT). This object can have multiple attributes. It must have an attribute Buoy shape (BOYSHP), which In turn will have one of eight different values, including the common ones, 1=conical, 2=can, 3=spherical, etc. It must also have attribute Category of lateral mark (CATLAM), which can be 1=port side, 2=starboard side, 3=preferred to starboard, or 4= preferred to port.

Besides these required attributes, the object BOYLAT could have an attribute Object name (OBJNAM), which is common, and it could have its height specified as its Vertical length (VERLEN), but this is rare. And it has an attribute Conspicuous by radar (CONRAD) with values 1=radar conspicuous, 2=not radar conspicuous, 3=has radar reflector…  and other attributes, such as its Status (STATUS), which has eighteen values including 1=permanent, 7=temporary, 8=private, and so on. Plus half a dozen more attributes, including Scale minimum (SCAMIN), which is the minimum displayed chart scale required for this object to show up on the display—a unique property of ENC, but this one can be overridden by user controls.

We see that this new chart object structure is all very specific, but we note that a light or bell or racon is somehow no longer an attribute of the buoy. Before we had lighted buoys; now we have lights and we have buoys, and we have fog signals, and we have racons. These are now all separate objects, and each of these objects will have its own set of attributes. The list of attributes for a Light (object LIGHTS) is long and complex.

When an experienced navigator looks over the list of some 400 charted objects, two things stand out immediately: there is no object called "Tower," and even more surprising, there is no charted object called "Rock." This is one of the moments when we question whether we are going to like this new chart system or not! On the other hand, this is not at all a problem for someone brand new to navigation, who has not worked with paper charts for years. They do not have the muscle memory of the role these objects played in their lives for so long.

But after a few deep breaths, we realize that if we are to organize charted objects into logical categories, we can think of a tower as a type of landmark, which is indeed how this works. We have the chart object Landmark (LNDMRK), which has an attribute Category of landmark (CATLMK) that takes on one of twenty options, such as 3=chimney, 9=monument, or 17=tower. We can also have cairn, mast, statue, windmill, and so on. 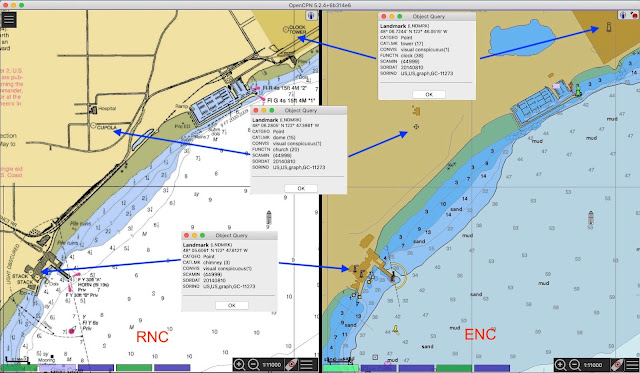 Paper chart (RNC) on the left. ENC on the right do not have labels for landmarks unless it has an Object Name (OBJNAM), but they do have different symbols for different values of CATLMK and FUNCTN. These are views from OpenCPNs split screen option. The inserts are the pick reports from the ENC chart on the right. In passing, note that RNC sector lights mark where the light is obscured, but ENC marks the area where they can be seen.

This is certainly a manageable structure to Iive with, but we have to deep breathe again when we learn that landmark objects will most likely not have a label on the chart as we are used to in RNC, so we have to click it to read it. This is another part of what we have to learn about the use of electronic navigational charts. The various landmark symbols are shown below from the NOAA Chart No, 1. 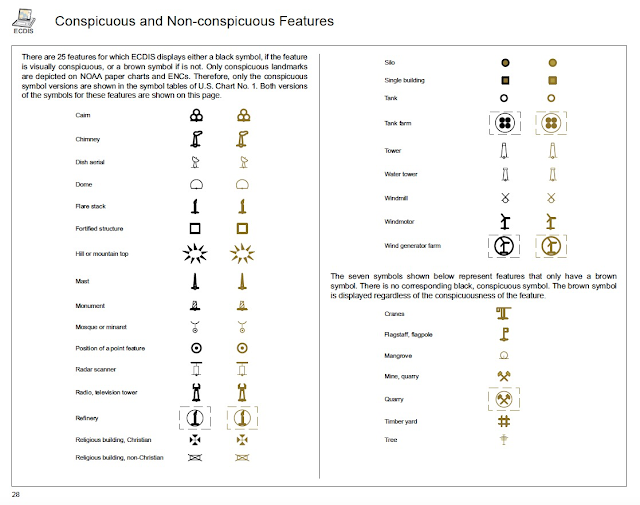 The statement top left that non conspicuous landmarks are not shown on NOAA ENC does not seem to be true, but i will have to look more into this. Some do exist, we have practice quizzes using them, but maybe the ones we found are chart errors? There are certainly a lot in Europe on official ENC there.

From this we begin to see benefits over paper charts as well. We learn, for example, that landmarks have another attribute called Visually conspicuous (CONVIS), with values 1=yes and 2=no. Then it turns out that the symbols are subtly different for conspicuous landmarks—they have black outlines, whereas not conspicuous have brown outlines—look out for that one on our quizzes! We do not know if a landmark is conspicuous or not by looking at a tower symbol on a paper chart, just as we likely do not know its color, color pattern, height above the ground, radar observability, and more, which we can learn from an ENC if these data happen to be encoded for that specific landmark. In short, things are different, but once we adapt to that, we see things are better... or certainly potentially better.

Rocks are another story, which I leave to another note. The object is Underwater/awash rock (UWTROC). Unlike paper charts with three rock symbols, all rocks on ENC have the same symbol, which we distinguish with a right click on the asterisk symbol to read the attributes. Also there is a new definition of "awash," which merits its own discussion.

The structure and use of ENC is the main topic of our book on electronic chart navigation. 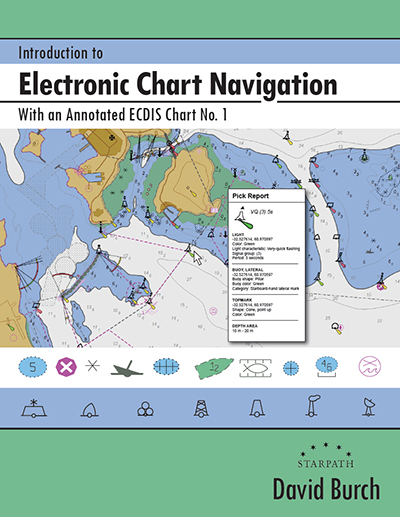