True Wind and Ground Wind—and Why We Need Both 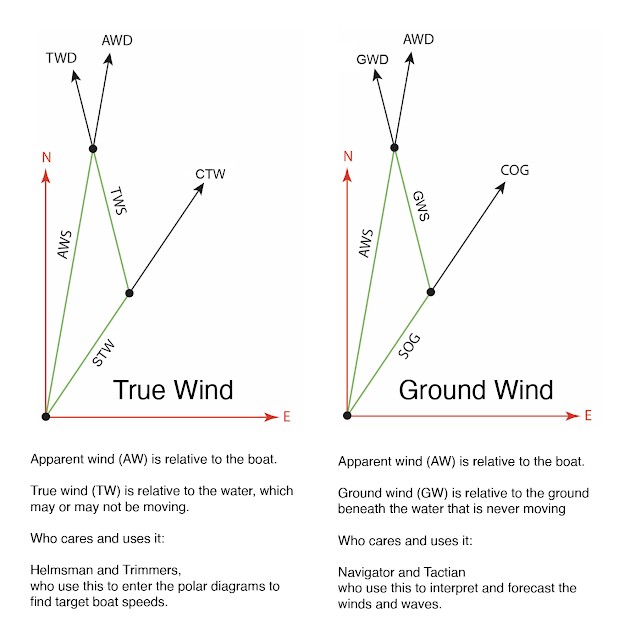 Above is view without current and we see TW and GW are identical and both equal the wind on the grib, read from the cursor position in the status bar.
Recall that after clicking to see the image you can right click again, open in new tab and then zoom in for more detail.
Below we add the Gulf Stream and this boat is sitting in about 3 kts at the moment.

Now we see that only the GW agrees with the grib winds and the wind directions differ by 4º and the wind speeds differ by 3 kts.  So the effect is clear, but the real value comes in analyzing the trends, which can tell us much, even if the actual values do not differ too much, but this will take me a bit longer to put together.
Another thought to address is the uncertainty in the forecasts is something like ±2 kts on the wind speed and ±10º or maybe a bit less on the direction. These uncertainties are about the level of differences in the two wind definitions in some cases—but that fact should not distract us when it comes to an effort to do the best we can in the analysis. One definition of the wind is right for this comparison and the other is not, and even though the forecasts have a notable uncertainty, that does not mean they will be wrong by that much. In short, it is not productive to ignore this distinction in wind definitions because the uncertainties in the forecast data and our own measurements might be comparable. By ignoring the distinction we increase our measurement uncertainty in a way that could be avoided.
__________
Here is an earlier article that includes the formulas we use to compute the winds, plus much discussion of the concepts in the comments.  True Wind From Apparent Wind — Revisited.
Posted by David Burch at 9:55 PM

Interesting article! But how did you manage to display GWD/GWS in qtvlm?

David, there is some strange usage in this post. I have alway thought that apparent wind is the wind felt on the boat, and true wind is the wind experienced by the flag on the flagpole. I have never heard the usage "ground wind".

You say in the first paragraph below the diagrams that the helmsman feels the true wind. This is either a typo or a new meaning.

You also say in the diagram and elsewhere that the true wind is relative to the water. Bowdtich (2017) defines True Wind as "Wind relative to a fixed point on the earth." which is clearly not the same thing.

I'd like to know more about these usages. For example, is the "true wind" / "ground wind" usage common in the navigation instrument community? And did you really intend to say that the helmsman feels the true wind?

Thank you Skippy. My language was way too figurative. The only wind that anyone or anything actually feels on the boat is the apparent wind. I have changed "because they feel it" to "because this is the wind their target speeds are tied to as presented in the polar diagrams." The note lists programs I know of that use the term GW and lists just two wind instruments that use it—there are likely more.

It is frankly a bit of a mess in that the traditional term "true wind" was taken over by yacht designers very early on before a lot of modern instrumentation and programming was in place, so certain nuances were not considered. Also it seems that some nav programs and instrumentation are not entirely consistent on how they use the NMEA sentences for this. In other words, we do not always know if something referred to as "true wind" in a sentence is ground wind or not.

To learn more about this, you might find extended discussion in a forum that focuses on sailboat racing. For us we simply stress that polar diagrams use true wind (water based, CTW, STW) and grib files of model wind forecasts use ground wind (ground based, COG, SOG), and only in notable current is there a notable difference.

About GWS and GWD in qtVlm: I am using a beta version. I am hoping this will be part of the standard build in the near future.

While I don't consider myself a novice to weather and navigation, I find it very difficult to understand the relevance of this issue. I have no reason to doubt David's expertise but nevertheless cannot imagine the problem associated with his solution.
For me, apparent wind has always been more than enough information to translate true wind into the conditions I can expect on board. I consider routing software as it is, as a great tool for that purpose. After all, it also calculates the effect of current on the apparent wind. I understand that it may be necessary to distinguish the apparent wind into a part current and a part boat speed. That this can also be used as an indicator for weather changes is new to me however. Just as the assumption that polars based on true wind need rethinking.
So far, the article has not convinced me of the need for a third wind parameter. Nor that the introduction of 'ground wind' would improve the understanding of the average, and even not so average, sailor.

Thanks Ruud. I agree completely that this is not a major issue. I see its value only in so far as a way to do the very best analysis in cases when a decision might be crucial. And it is certainly fairly rare that this distinction matters a lot. It takes special weather patterns and in current to be significant, if at all.

As I see it, the role of GW vs TW comes up in two general cases:

1. Comparing measured winds with forecasted winds as a way to evacuate a forecast. I have some notes on this topic here: http://davidburchnavigation.blogspot.com/2020/02/evaluating-weather-forecast-slides-from.html and

2. The plot of TWD vs time (compared to GWD vs time) might miss a backing or veering of the wind when the heading of the boat changes in response to new wind speeds. Unfortunately, I have not been able to look for or generate data to illustrate this point as we are all here focused on our new course on Electronic Chart Navigation, which we hope to launch this month ( https://www.starpath.com/catalog/courses/1926.htm ). This topic actually came up in a Lesson of that course, in a simulator example in current where the TW did not agree with Grib wind. I will try to make examples of this point 2 as soon as we get underway in the course.

A related thought for weather analysis (observed vs forecasted) is that GW as computed above would not be affected by an uncalibrated knotmeter, whereas that would affect the computation of TW.

Thanks David, I like non major issues just like you, so please keep addressing them. Especially when it challenges my mind as you do with this subject.
We fully agree on the limitations of real wind only, to assess real sea conditions. But isn't that exactly where apparent wind comes in?

Your ground wind parameter is basically the definition of apparent wind for a boat with no propulsion, subject only to current or drift. Based on the assumption that this ground wind parameter provides more and different insight than when the effect of sails or engine is also taken into account. But why should I have to disconnect the most relevant part of apparent wind to get a better understanding of the wind I am going to experience during my sail?

It is clear that stripping down self-generated boat speed from apparent wind creates a new parameter, and that it makes sense to call that ground wind. But I still have to think hard, how and when that data could be useful.

David, thanks for your reply to my earlier comment. I'm a fan of Ben Ellison and I like "water wind". But I think I'm going to coin "raft wind" as my new term for what your article calls "true wind".