Outdoors with a clear view of the sky, we turn on the GPS and in seconds get a fix, and only periodically do we pause to be amazed at how accurate it is. To the vast majority of users, this is black-box technology. We might know that it works on a ranging principle, effectively measuring how far we are from the known positions of several satellites, and from that it can compute a position roughly like we do with radar, measuring the distances to two or three landmarks, and then plotting the intersection of these circles of position. The GPS measures the distances by timing the signals on their path from the satellite to our receiver.

Nevertheless, this is all black box. There is no way for most of us to comprehend the timing precision required (fractions of a billionth of a second), nor even how that might be achieved. It takes three satellites to get a two-dimensional fix and four to get a three dimensional fix, which is one more than we might expect, because the extra one is needed to solve the timing problem.

Typical GPS accuracies quoted assume you have a clear view of the sky, defined as seeing all satellites above 5º high in all directions—inside or near a structure (boat!) this is never the case. Then the nominal horizontal position accuracy is quoted at about ± 8 meters. It can in fact be a bit better than that, and it can be notably less than that in real conditions. The website gps.gov is an excellent source for all things GPS. It generally has plain language discussion of most topics, followed with links to the more mathematical and engineering matters. Mariners might also look at the GPS section of navcen.uscg.gov.  The FAA remains a primary reference.  There is also an online magazine (GPS World) devoted to latest developments, often with stories and links interesting to mariners and laymen—the latest issue has links to recent EGNOS studies.

On land, GPS accuracy is not often as good as we might get at sea with a well positioned antenna. But on land or at sea anything approaching 8 meters is remarkable, being a half a boat length or less for many mariners and indeed a boat length for thousands more.

On land it can be worse when part of sky is blocked. The proof positive way to test this is just turn your GPS on and leave it running overnight, connected to a navigation program that is plotting its track every few seconds or so. Be sure the program is set to high accuracy tracking.  In the morning you will see what the spread in values is, and indeed, whether or not the centroid of that track pattern is indeed where the unit was located.

This type of test gets you two numbers. The spread in values and the distance between the mean location and the true location. Be sure the GPS and the chart you are using are set to the same horizontal datum, such as WGS 84.

In a sense, the point at hand in this note is that if you do this test in the US or Europe with a relatively new GPS unit positioned next to the south side of a building you will likely get notably better results than you will get with it up against the north side of that building.

We can thank the aircraft industry for that as they are the ones who motivated development of a higher accuracy GPS fix so that aircraft could use it for navigation. The altitude or elevation output of an uncorrected GPS is not good enough for aviation; much of the time it is actually terrible, relative to what we can do with a modern barometer, which most all of our cellphones include.

The improved GPS signals are called "augmented," and the system in the US is called WAAS, the Wide Area Augmentation System. In Europe it is called EGNOS, the European Geostationary Navigation Overlay Service. There are also systems in India (GAGAN), Russia (SDCM), and Japan (MSAS), but we are not looking at these for now.

There are indeed other ways to notably improve GPS locally, typically called Differential GPS;  the USCG and others have offered such services for some years. They work essentially the same as WAAS that we describe below, but on a local basis. GPS can indeed provide centimeter level accuracy with these tools, along with other enhancements, but this is another topic, beyond conventional navigation. 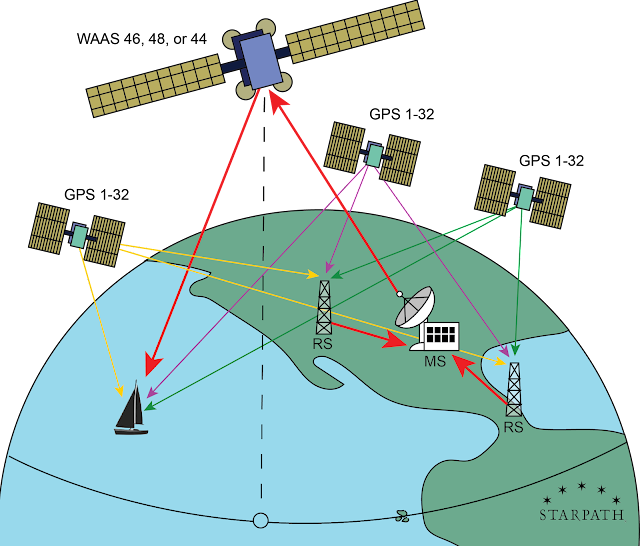 Figure 1. Schematic of the WAAS system for improved accuracy and availability. 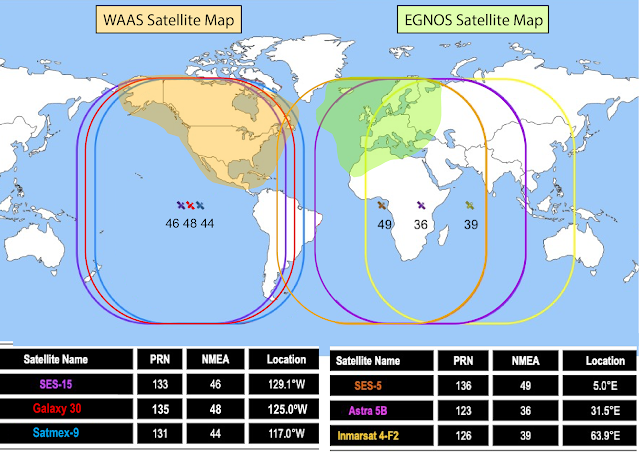 Surface footprints of the geostationary SBAS satellites. At the satellite locations, they would be directly overhead. At the boundaries shown they will be 5º above the horizon. These are the satellites in use as of Dec, 2021. The satellites are changed periodically, so you may see older versions online.  A satellite's PRN number (stands for pseudo random noise) such as 133 for SES-15. The NMEA satellite SBAS ID numbers are defined in NMEA sentence GBS as PRN - 87.  Thus PRN 133 goes to 133-87 = 46. This shows where the WAAS satellites can be seen, but only in the shaded areas can these be used for improved GPS accuracy, discussed later in this post. (NMEA 48 replaced NMEA 51 in May, 2022.)

The GPS fix we get without help is not as good as it could be due to small errors in the timing of the signals, precision of the satellite's ephemeris (how well we know where they are located at any second), atmospheric effects on the signal transmission, as well as the lingering problem of multipath errors when the signals reflect or diffract around objects on the way to the receiver whenever we do not have a "clear view" of the sky. All small effects, but we are considering here very precise measurements.

The system works like this: The several reference stations continually record the GPS fix they get from the satellites in view to them at the moment, which they compare to their precisely known geodetic location. The discrepancy observed is then passed on to a master station that coordinates that observation with similar ones at the same time from the other reference stations, and from this they deduce what the errors are in the signals from each of the satellites that would account for the observed discrepancy. This information is then transmitted to antennas that send the data to the WAAS satellites, which in turn sends it back down to any WAAS enabled receiver on our vessels (or smart watch!) for an improved position fix. Although it was an advertising point at one time, these days, most GPS receivers include this functionality routinely.

With WAAS in place, the nominal optimum horizontal accuracy of 8 m is reduced to about ±1 m and the vertical accuracy is reduced to about the same. On board, however, we would typically set our GPS to compute only a 2-dimensional fix, and we manually enter the elevation of our antenna. Ruling out the 3-d fix yields faster and more dependable positions.

Note too that these are capabilities of the system, viewing all the sky with presumed good geometry of the satellites. There can be times when the geometry is not as good, like doing a compass bearing fix using two landmarks that are near each other. During times when the geometry is not good,  the accuracy is not as good. This varies with time. I am not sure of the best summary, but in practice it is likely that the addition of WAAS takes a fix from a practical average of ±10 m down to ±3 m.

But for this improvement to take place, your GPS receiver has to see one of the WAAS satellites. At sea within the footprint of the satellites this is easy, but on land or on inland waters, we have to check that they are not blocked by local terrain or buildings. In short we need to know the angular elevation above the horizon of the WAAS (or EGNOS in Europe) satellites, and the direction to them (azimuth) from our specific location.

Sat Lon is the longitude of the WAAS or EGNOS satellite, from the table above. Ship Lat and Lon is the observer's position.  Elevation is the angular height of the satellite above your horizon viewing in the true direction Azimuth. Enter the data then press Calculate.

You can find the elevation and bearing to any of the geostationary SBAS satellites from any location within their footprint this way,  then put this info into your logbook or memory, so you know where to look for this extra accuracy.

But keep in mind that you can see the SBAS satellites from a vastly larger area than they actually provide augmented accuracy for. Each of the systems is limited to providing accuracy data to regions that are covered by their reference stations. Outside of these areas, outlined below, you can be getting a fix from satellites that the reference stations do not see. So these services are limited to the regions shown. 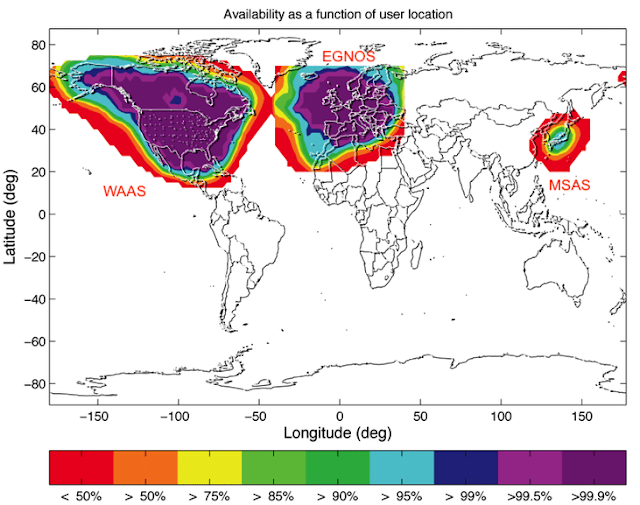 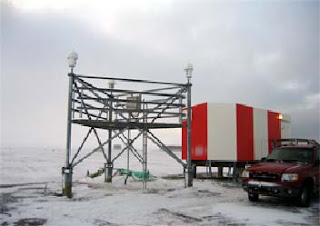 The farthest north WAAS reference station in the US at Barrow, AK. I believe they all have the same design.

Here is an example taken in front of our office. The GPS (Bad Elf Pro) had a good view of the sky, but not at all what is officially called  clear or full sky. 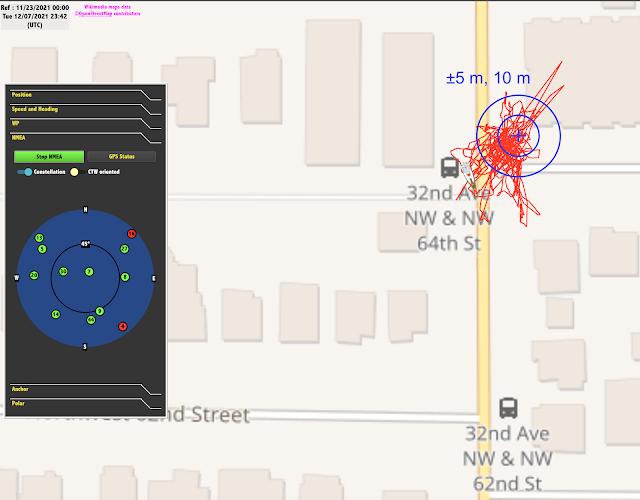 This was a run for 3 or 4 hours. This does not show very detailed results in that it would be best to record Lat Lon every few seconds and then plot those distributions. The notable NE and SE excursions were likely just a few seconds each.  The mean location of the track seems to be roughly 5 m SW of the presumed true location, but we do not know if this OpenStreetMap is accurate. It does agree with Google Earth, but they could be from the same source. In short, it is always valid to question what we are calling the right answer. If we are using an ENC, we can look into the accuracy of the data parameter for where we are. You will find that this varies more than we might have guessed.

The more interesting observation from this has been the confirmation that only one WAAS satellite shows up at a time, even though all might be in view. In our case here, I did actually see each of them (44, 46, and 51) on different days, but always only one at a time. This seems a logical way for them to behave.

We need to look to NMEA sentence GGA to determine if the WAAS is active. Below is from a later view when it switched to 51:

satellites used for the fix + last 3 related to uncertainties

sat number, elevation, azimuth, SNR for each, 4 to a sentence.

I will return later to add more about these sentences.

Reference for computing altitude and azimuth of the satellites: https://tiij.org/issues/issues/3_2/3_2e.html