We have always praised the value of having a paper chart catalog on board as the best way to know what charts are available and a way to index what you have on board. Just annotate the catalog with a highlight marker around the charts you have.  This proved very valuable when doing a lot of sailing over several charts, or any longer voyage.

Originally, folded paper chart catalogs were delivered in great bundles to all chart dealers, who in turn handed them out to mariners who ask for them. Then as cutbacks started, this was discontinued, to be replaced by PDF versions that could be downloaded and printed or not. These could be annotated in the digital form as needed. The transition to PDF happened quite a few years ago.

But just recently, we noted that the PDFs were gone, as were previous links and web pages devoted to them.  So this is a deeper level of cutback—foretelling inevitable cuts related to paper charts, all of which are destined to be gone by end of 2024. These catalogs were all about paper charts, or the raster echarts (RNC) copied from them. Those catalogs told us nothing about the vector charts (ENC) we will all be using in a year or so. Several paper charts have already been removed... and indeed minor details are no longer being updated on the paper charts, but only in the ENC.

But we still have a couple years of sailing on paper charts where these catalogs remain valuable, which made me that much happier to discover a solution to this that will certainly take us right up to their last day on earth. The solution comes from the Coast Pilots, which we can download in full as PDFs.

Despite cutbacks in some areas, the Coast Pilots are flourishing and becoming even more important resources to all mariners, not just ship captains.  They include, for example, a complete set of the Navigation Rules, and much local knowledge on wind and current. Because some states have two Coast Pilots covering their waters, we made a Custom Interactive Index to the Coast Pilots that resolves that issue, which is not clear online.

The Coast Pilots also include all we need to create a dedicated Paper-Chart Catalog. At the end is a link to download the one we made to replace the now defunct original Pacific Coast Chart Catalog. The cover looks like this: Each Coast Pilot has an index page showing the coverage of each chapter. 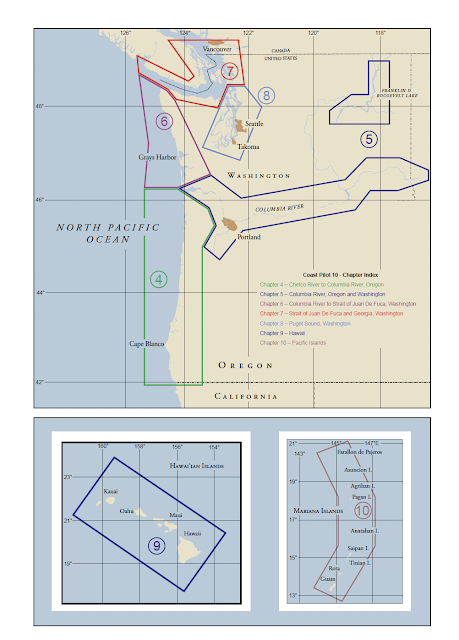 Then each of these chapters has, somewhere included, a page that shows all charts in that region. The Chapter 8 example is shown below. 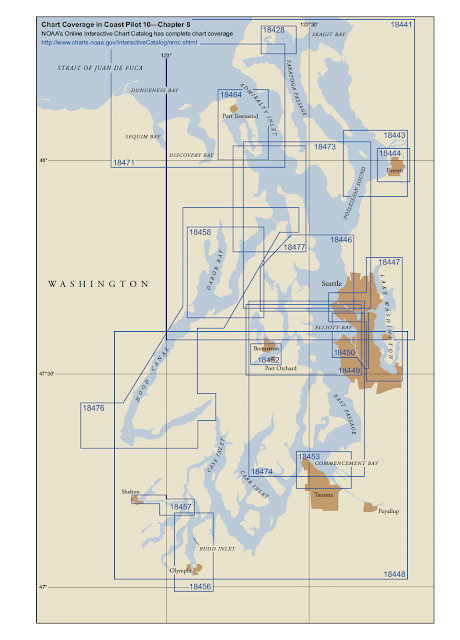 Once you have these pages extracted from the Coast Pilot for each chapter, you can compile those to make the Chart Catalog.  The Pacific Coast is just 10 pages.  Then you can highlight these to mark the charts you have on board.  There are tools on line for extracting PDF pages, or just use screen caps and then print them. 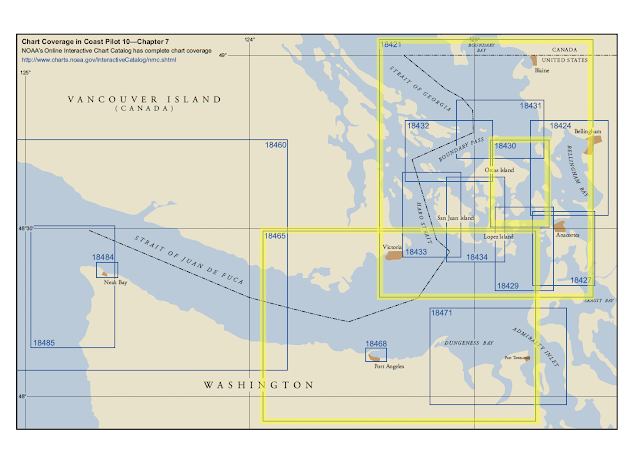 This is what a page might look like once you have highlighted the charts you have on board.
Here is the Chart Catalog made as outlined above.
Pacific_Coast_Chart_Catalog_2022.pdf
Once we are switched to all ENC and the new NOAA Custom Charts (NCC), which will be our paper chart replacements, we can think on ways to index these. But they will all be custom areas,  not likely following existing paper-chart borders.
For the ENC we will eventually all be using, there will then be fully reschemed ENCs that have tidy borders, scales, contours, and logical names, so it will be easy to make graphical indexes for these—but this is more or less a non-issue, in that we would most likely have all of the charts installed at all times. Looking back at that time, these paper chart catalogs will be like the plastic trays we used to organize our music cassettes.